If I may chart my ALCS emotion over the past several days: 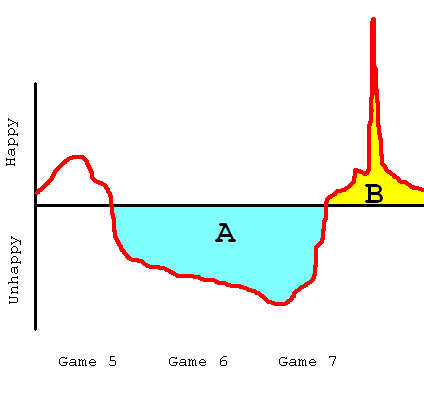 Game Five was great. For a while. Then came the comeback, which would probably be called The Comeback were it not for the eventual outcome of the series. My mood started to fall the instant Ortiz left the ballpark, and Drew's home run dropped me below y=0. There I remained for quite a while, as the inevitability of the whole thing began to sink in. While I tried to rationally talk my way out of it, I was convinced that this series would go to the Red Sox. Convinced. I don't know, maybe that was just a defense mechanism. Maybe it was another example of me protecting myself from the worst by expecting it. But whatever was going on, I was unhappy. I got to dwell on the anticipated collapse almost all weekend long, and Pedroia's home run last night hardly did anything to change my mind.

Then the Rays tied it up. Then the Rays took the lead. Then Matt Garza happened and David Price flipped a tizzy and the Rays won the game. I jumped, I screamed, and I leaned forward with my hands over my mouth as I watched my beloved bandwagon team celebrate - I mean really celebrate - for the first time in its history. I spent the rest of the night content and I woke up this morning with a smile.

While the joy derived from watching the Rays defeat the Great Satan has provided a kind of dull happy roar all day, though, I'm not sure it competes with the constant agony and cyclical resignation from earlier in the weekend. Which brings me to my thought. The area of A is significantly greater than the area of B. However, the peak of B is significantly greater in magnitude than the peak of A. And everyone who was pulling for the Rays will tell you that the outcome was absolutely worth all the torture. Obviously.

What this implies, I think, is that we watch sports to experience peaks, and that as long as there's the potential for a peak in the future, it doesn't matter how sustained the dejection might be in the present, because we reassure ourselves with the knowledge that eventually there will come a point at which everything becomes worthwhile. And there's always the potential for that peak in the future. Always. Because nobody knows what's going to happen.

Sustained happiness sounds nice and all, but that isn't what we want. Not at the heart of the matter. What we want is to experience enough sudden, fleeting highs to make up for the long, ugly lows. And those highs are so powerful that even the mere thought of them is enough to pull us through the darkest of days. Because we're convinced that all of that darkness may be undone by fifteen minutes of spectacular, shimmering light.

The Seattle Mariners suck. I'll never be able to quit them.