I was doing a little image searching when I stumbled upon the following picture from USA Today: 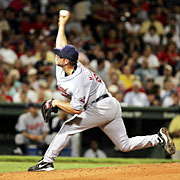 That is one hell of a bizarre delivery. For the sake of comparison, compare that picture to one of Mark Prior, who's generally thought to have real solid, fluid mechanics (MSNBC):

Problems with Millwood (in no particular order):


It's not just with this one picture, either - having gone over a few Millwood video clips on the MLB.tv archives, this is his consistent delivery. In the words of Will Carroll when discussing Brett Myers: "He's sure pitching well for someone as messed up as this picture looks."